I have been fortunate enough to meet a true legend, moored up in Lymington.

Leslie Powles, three times round the world single handed, an absolutely amazing person. He heard about what I am doing and invited me onto his boat 'Solitaire' to have a chat over a cup a soup.

He gave me and signed copy of his book which I will truely treasure. 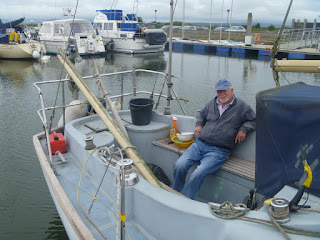 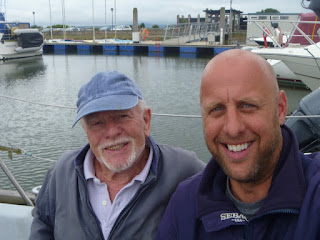 Born a coward, Leslie Powles claims, he saw no point in fighting - hence the title of the book, 'Hands Open' But god smiled benignly when the author who had never sailed in his life, decided to build a 34ft boat called Solitaire and take off single-handed around the world. He left Lymington after eight hours of sailing experience on his own. So ignorant was he when his boat was launched that he had not even the ability to put it on a mooring a few yards away.

Instead of finding the Caribbean he literally hit Brazil south of the equator. It was at that stage he decided he would have to salve his conscience by making a second circumnavigation after completing his first 34'000 mile east-to-west world voyage (August 18 1975 to April 30 1978).

The second circumnavigation, again from Lymington, this time non-stop, was the first west-to-east single-handed trip, 329 days and 28'496 miles alone at sea, rounding the five great capes including Cape Horn between July 9, 1980 and June 3 1981. This was the world's loneliest voyage without sighting land or communication (he was too poor to afford a radio transmitter).

For the last two months of his second trip he survived on a half a cup of rice a day, with a little milk powder and sugar added, and rainwater collected from the sail, losing 76lbs of body weight in the process.
Posted by Paul at 06:53

Paul
You will get to know me.